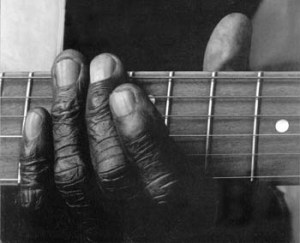 Been awhile since I was, bitten, possessed, with the insane desire that makes me race for the nearest laptop, tongue hanging out in glee, foamy spittle flying out my mouth, to put down words in a story. Been writing boring stuff for work though. But yesterday as I heard the strings from Victor Uwaifo while bumping down a, well, bumpy road in a rickety rickshaw keke that had long outlived its shock absorber, I was stung. Make of it what you will, but this is a story about music, and it’s power.

If you see mammywata, never, never run away eeeh ehh..”

His slim fingers raced down the strings as if of their own accord, they were long and thin, those fingers, as if starved of the very life with which they coursed along the neck of the guitar, weaving magic. The nails were cut short, just before the hard pads, which thumped down on the frets, moving from key to key as he strummed the six stringed acoustic. As his fingers slid down the guitar, punctuating the rhythm, it seemed as though, almost imperceptibly, that smoke curled from the strings, a mere shadow perhaps, but tendrils wafting out from beneath the bowed head of the player, and on to the audience.