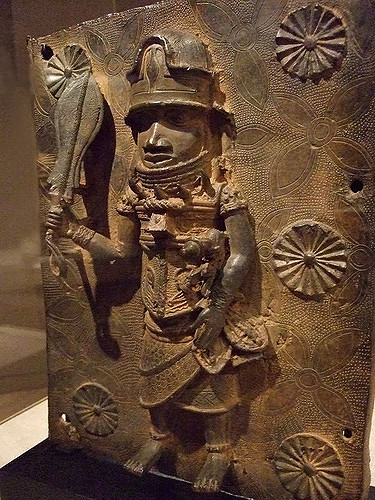 In Africa, the sun rises and sets without warning, and the winds blow through the old forests with the songs of legends, the marks of their passing staining the blood-red sands.

And some of those legends are true.

In the old Edo, the first true black civilization, the empire was home to many tribes and cultures. Bound together by the Obas who ruled after the era of the Ogisos, the sky kings, it stretched almost five thousand miles in either direction; from the steppes of the Dahomey to the swamps of the Niger Delta. Within were the Itshekiri, the Etsako, the proud Ijaws and Urhobos, the noble Esan, the big and powerful Binis and the Igbos both west and east of the Niger River. All paid homage to the Oba and in turn were blessed by him, for the Oba was more than just a man, the Oba was king, the Oba was god on Earth.

The Bini empire was called Edo and it was powerful, the envy of the neighboring kingdoms to the west and the north. Their trade guilds employed the most skilled of artisans; blacksmiths and hunters, their warriors, soldiers from birth, trained in the knife, spear and hand-to-hand combat, and also in the finer arts of war and strategy and juju. It was strategy that led to the building of the Bini moats and high wall which surround the capital of the Edo Empire at Benin City, till this day. Moats that were built with the aid of giants enslaved and brought from across the deserts. Strategy and wisdom, both physical and spiritual.

The warriors who came from all over the kingdom, all swore allegiance to the throne of the Oba, and whether Esan or Ijaw, all spoke the lingua franca, a bastardization of the Bini language, known as the Edo language. Within this military were special cadres, the strategists, the juju priests and the elite warriors. This is a story of one of those elite warriors, and as with such tales, it began at night… END_OF_DOCUMENT_TOKEN_TO_BE_REPLACED